Why You Should Go with Go for Your Next Software Project

10 reasons to use Golang for your next project

Go is a relatively young open-source programming language. Google designed it to meet the needs of developers working on large-scale projects. Although it incorporates concepts from other languages like C, Go has unique features in terms of application development capabilities. It is more geared toward creating servers and backend systems, but as a general-purpose programming language, you can do anything with Go.

Go is very powerful when it comes to concurrency. It is easier to create applications that effectively utilize modern multi-core and networked machines while keeping neat and modular programming code.

The History Behind Go

Go was developed in 2007 by Google. The idea was to simplify the software development process with a language less complex than those used at the time.

Experienced programmers Ken Thompson (inventor of UNIX and C), Rob Pike (co-author of UTF 8 and UNIX format), and Robert Griesemer were the people behind the new language.

The widely used C ++ was outdated and extremely complex. As a result, the development teams were less productive and wasted more time on bug fixing than coding.

Go was designed to be simple to use and ideal for building complex programming systems. That made it possible for large software development teams to collaborate and troubleshoot complex projects effectively.

Advantages of Using Go for Your Next Project

Since its initial release of version 1.0 in 2012, the Go language has demonstrated its robustness. Let’s explore 10 advantages of using Golang for software development. 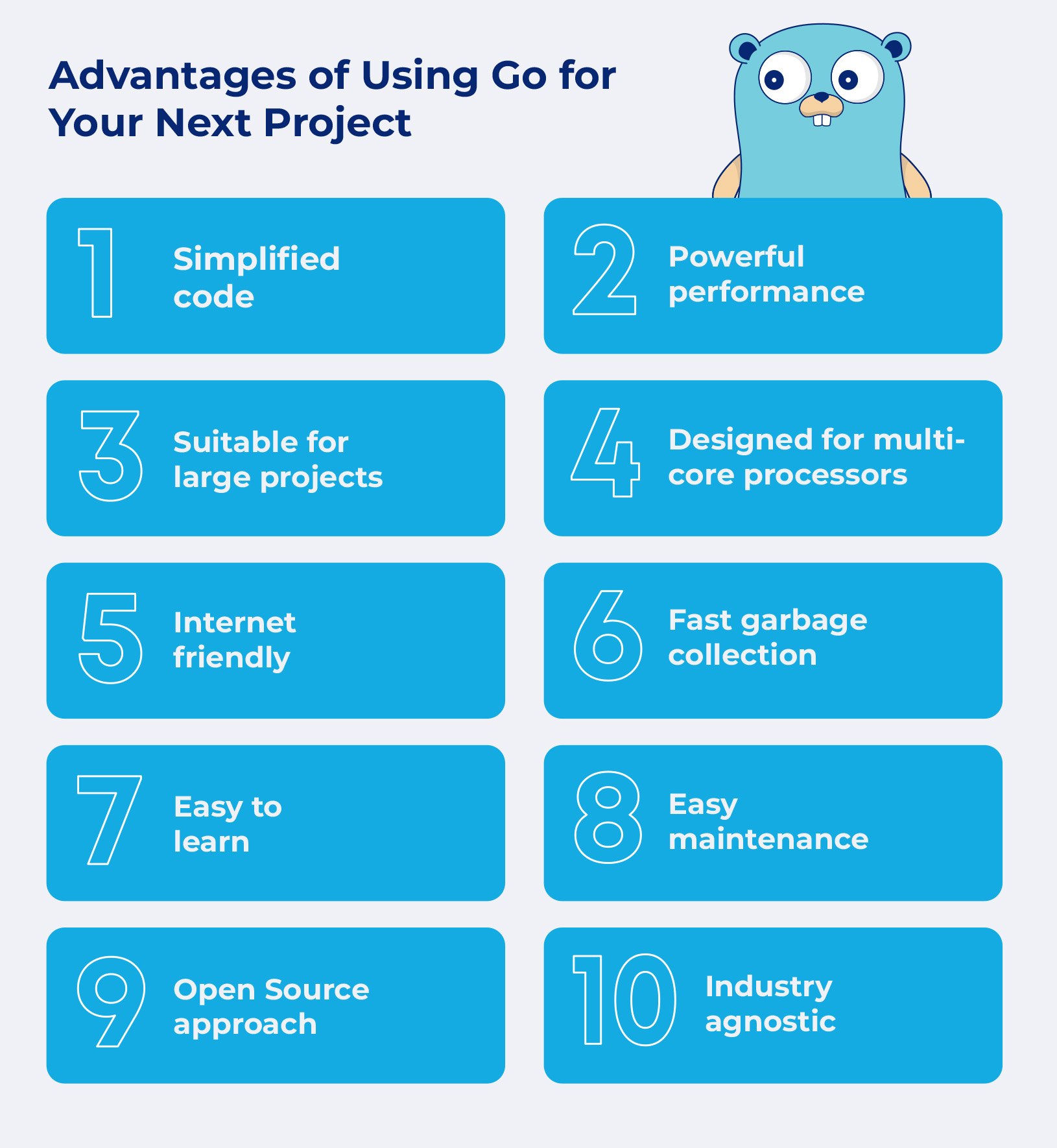 Golang code is less complex and borrows several concepts from other programming languages. This comes with plenty of benefits – developers need to traverse fewer lines of code, saving a ton of time. This is important since writing code takes less time than actually reading it.

The simplicity of Go adds up to its powerful performance. It runs faster, compiles quicker, it’s easy to maintain and support, and allows for shorter software development lifecycles. Golang compiles directly to machine code as it doesn’t use Virtual Machines, providing an even better speed advantage.

3. The go-to language for large-scale projects

Many enterprises choose Golang because it accelerates and increases work effectiveness on more challenging projects.

Golang is based on the concept that, preferably, there should be only one solution to any given problem. In contrast to other languages, where there may be virtually as many solutions as programmers, making project collaboration even more challenging.

Go is designed for the modern era of cloud computing and parallel processes utilized by the current processors. Other popular computer programming languages like Java, JavaScript, Python, Ruby, or C, C ++ were created before the multi-core computers were widely used. With Golang, it is easier to utilize all CPU cores without complicating development.

5. Designed for the internet

With the Golang standard library, developers can build complex web services without third-party libraries. It makes it perfect for web development with fewer iterations and fewer possibilities to implement the same feature.

Any application’s performance is greatly enhanced when you have a quick garbage collector like in Go. The system’s memory isn’t crammed with junk supporting the development of fast-running apps.

Programmers frequently see Golang as C without the inconvenient flaws. Its syntax appears familiar to developers, making it easier to learn if you are familiar with the C concepts.

One benefit noted by businesses utilizing Go is the abundance of tools available to developers for automatic code maintenance. The results are virtually identical to those produced by human programmers.

Due to its open-source nature, Golang has many fans among programmers and a massive community around it. Through forums, tutorials, and open-source projects, Go encourages the use of novel solutions while the community swiftly finds and fixes coding flaws.

Adoption of the Go programming language may result in quicker and more productive coding, which boosts output. This is why Golang is recognized by many big names across various industries.

Go was developed by Google, so critical code in various Google services such as Google Earth, and YouTube were rewritten in Golang. Due to its versatility and speed, many other companies are using Golang to streamline their software products and development. Below are some of the most prominent use cases across top industry players that have chosen to use Go for their projects.

Go Use Cases in Different Industries

Dropbox, one of the leaders in the file-hosting industry, effectively utilized Golang to replace its monolithic software design developed on Python. Dropbox needed to scale up quickly due to its growing user base. The company migrated significant elements of the backend infrastructure to Go for its better speed and multi-core capabilities.

Uber, the leading booking app in the shared services economy, is also using Go. More than a hundred of Uber’s services are written in Golang. The Geobase services, matching riders, and drivers also utilize Go. The services guarantee high reliability with 99.99% uptime and enable Uber to implement dynamic pricing in the app.

Alibaba Group, the well-known Chinese e-commerce giant, has its container engine – PouchContainer written on Go. The container can pack and deliver any application, and with the help of Go, it offers a lightweight runtime environment.

Capital One is a Fintech company helping customers find the right credit cards and loans. They saw a vast performance improvement in Go compared to the previously used Java. The company loved Go’s simplicity, reliability, and speed. Capital One developed Golang endpoint to the API which acknowledges when their credit card offers had reached the displays of their customers.

development projects. American Express modernized its architecture with Go to improve the speed and scalability of its payment and rewards systems.

SoundCloud runs over a dozen services and more than a dozen repositories entirely on Go. The popular audio streaming platform utilizes Golang also for their new backend projects.

When to Choose Go for Your Software Project?

As with any programming language, Go has its pros and cons. Its speed of execution, simplicity, flexibility, and exceptional reliability make it perfect for servers, systems, databases, APIs, and web development.

However, migrating to Go can take a lot of effort. It might not be worthwhile if you are early in business development and still testing your market and your business model. For companies with steady growth, Golang can be a fantastic choice. It achieves the crucial balance between productivity and performance, especially for businesses that rely on prompt and effective server responses. 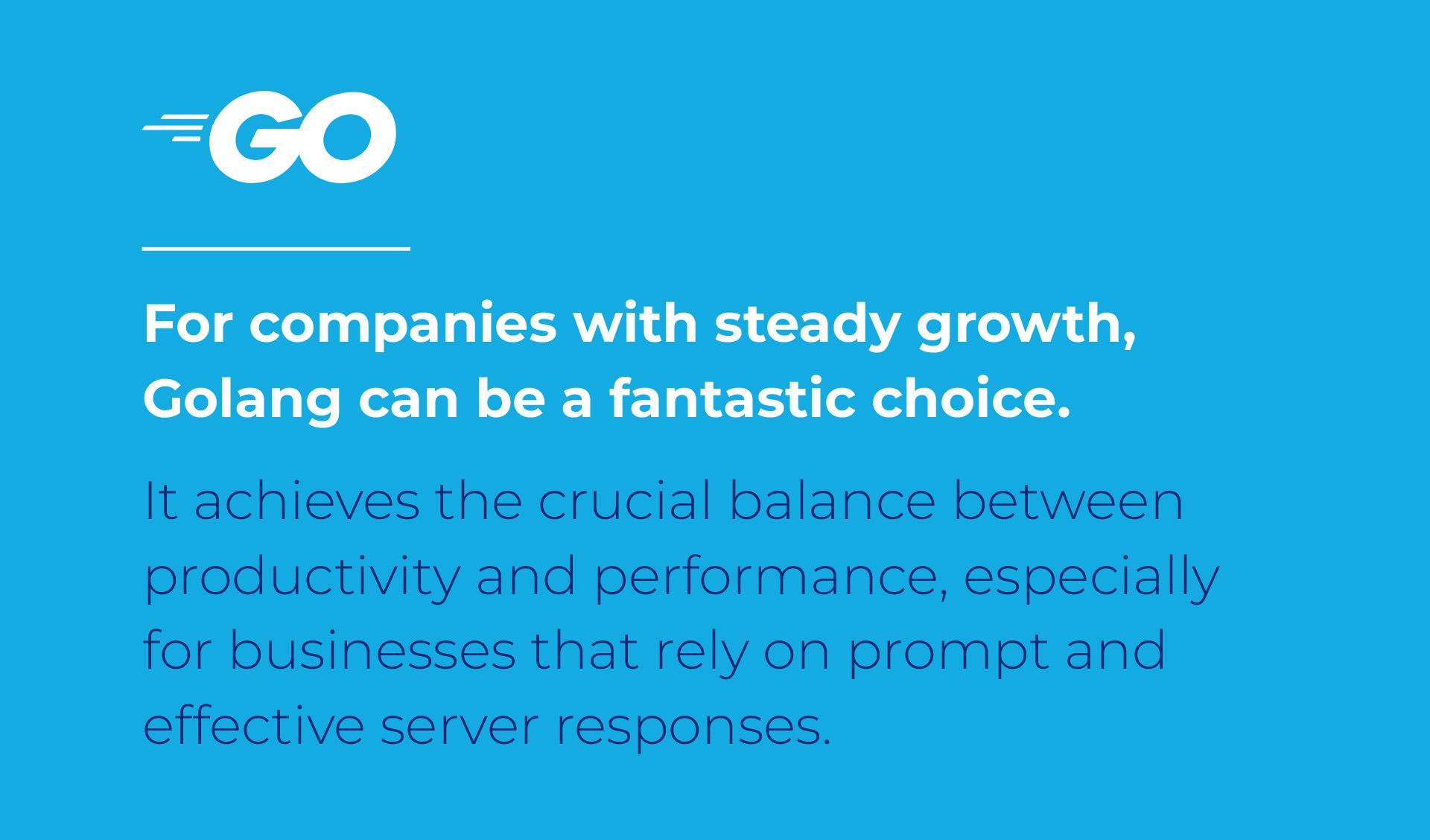 Golang is expected to be adopted by an increasing number of enterprises as cloud solutions, IoT data, and new technologies like 5G become more widely used. In order to integrate legacy systems into the cloud, Golang plays a crucial supporting role in API bridging. Go will be the go-to language when moving toward more cloud-native applications development.

It could be time to switch to Go if you believe your current programming language isn’t adequately addressing your needs. In a nutshell, whenever you want to use another technology to build a backend, think about Go, which in most cases will be a better choice with its multi-core performance.

There are numerous benefits to using Golang, and now is a great moment to make the leap. At Scalefocus, we have a rich experience with using Go for various software development projects across different industries.

Contact us to learn more about how we can help you build fast, reliable, and scalable software solutions with Go.